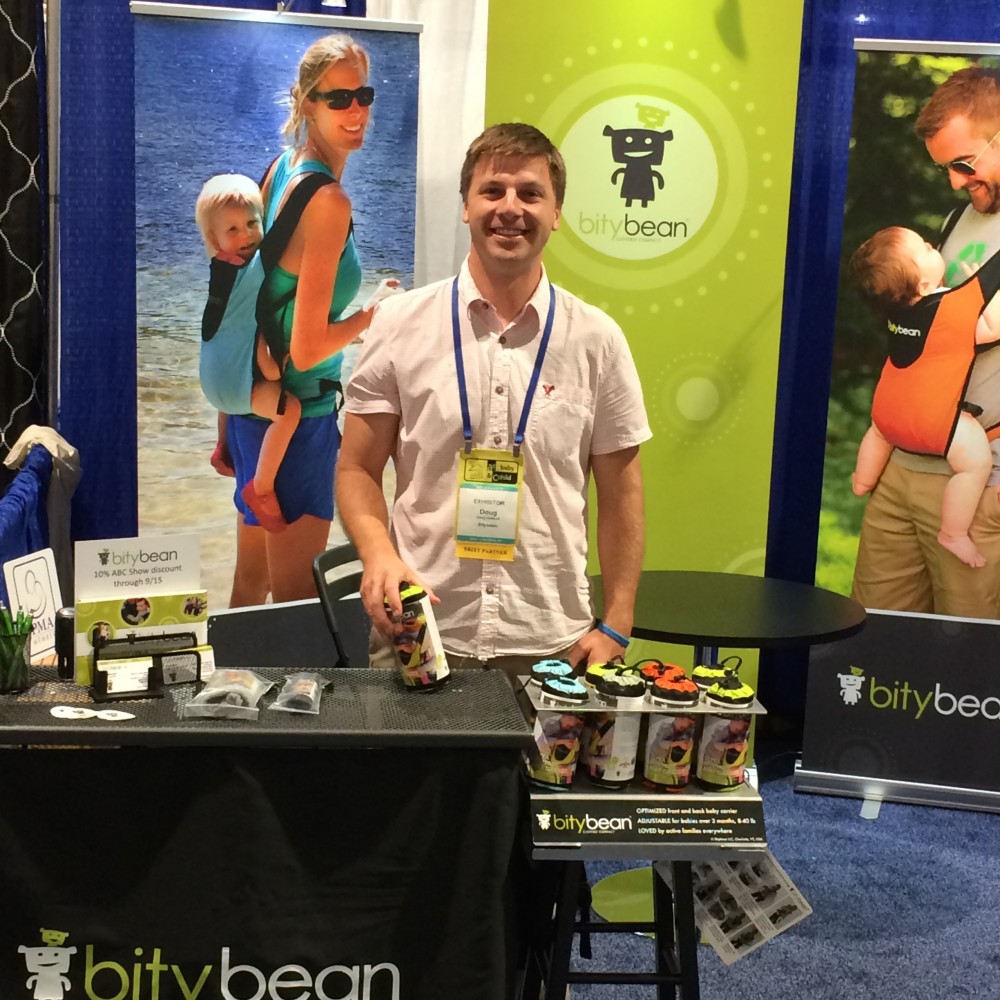 Prototyping, testing and a folder full of ideas. Sometimes that can lead to a successful new business. Doug Hartwell, founder of Bitybean developed an UltraCompact Baby Carrier, a business that he has launched from Charlotte. I collided with Doug to talk about his design process for this new product.

RN: How did you make the shift from working as an engineer at General Dynamics to an entrepreneur selling a baby carrier?

DH: I’m an engineer by background and I have a ton of different ideas. Over time, I had developed a folder full of 30 new product ideas. I love 8 1/2×11 white sheets of paper. Typically, I’ll sketch some concept out and then circle out certain details as reminders of things that I’ll need to figure out how to solve. If I have time, I’ll revisit it and think through those challenges or holes. I’m a pretty good sketcher.

The Bitybean baby carrier started with my own daughter. We live right in Vergennes, and we were walking into town. I had an umbrella in one hand, since it looked like rain. We shopped for groceries and on the way back, the rain started. I had a kid in one arm, groceries in another arm, and this umbrella, and my daughter was getting wet. I thought, “I have three simple things and I cannot make this work.” So, I went home and sketched out an idea and stuck it in my folder.

About a year later, I started to get some energy for a life transition and wanted to start my own company. I went back to my folder full of ideas. Being the engineer that I am, I started doing some trade study analysis on some of the ideas to see how complex or expensive they would be to make.

The UltraCompact baby carrier jumped to the top of the list: I knew the baby product market was strong, and that the prototype wasn’t overly complex. In fact, I could prototype it myself. So I did: I sewed some early prototype carriers. I tried them with my own daughter who at the time was four, so she was a little big. In one sense, I started with an extreme user: if it was comfortable for her, it should be comfortable for the younger, smaller kids too.

RN: The prototyping was key to the product development and design. Tell us how that process went for Bitybean.

DH: I started trying it on my friends and their kids and asking their opinions. People kept telling me it was a great idea. The more I refined the prototypes, the more people liked them, and they kept giving me even more feedback to make it even better.

One of the big issues I had was the to find people with babies. A friend helped me bring together a focus group of two other moms. I let the mom’s try on the Bitybean prototypes and walk around the house and the yard. Then they would say “I don’t like this” or “This is uncomfortable” or “This clip was hard to reach” or “I couldn’t adjust it.” They were brutally honest, it was hard to hear all of the bad feedback, but you have to have thick skin if you’re going to launch a new business. Fundamentally, though, the concept was very attractive to everyone.

Later on, when we got closer to our final prototypes, I actually put an ad on Front Porch Forum saying “Looking for Moms with Babies.” Whenever we changed something in the prototypes or materials, I’d call them up and ask them to meet somewhere where they could try it on and tell us what they thought. One of those moms became the model for our first promotional material.

RN: What are some of the good breaks you’ve had so far with Bitybean?

DH: The first big break was meeting with Jim Sadler an industrial product designer in Vermont. A friend recommended him but after checking out his bona fides (he’s worked great consumer goods companies like Oakley, North Face and Burton),but I felt he was way out of my league. I waited to meet him until I had more of my story dialed in.

When we met, his first reaction was to tell me he didn’t work with small startups since he’d had a number of bad experiences with them. But after looking at my prototypes and business plan, and listening to me tell my story, he decided to make an exception with me.

Jim’s involvement was critical to our success. He completely changed our approach to the materials we used. He came at the product from a different angle than I had. His in-depth knowledge of things like fabrics and micro-buckles helped make the Bitybean baby carrier great.

The other big break was at the All Baby & Child Expo. It’s the biggest baby retail show in the U.S. The problem was that to attend, the rule was that you had to be in at least two retail stores. We weren’t in any! Our final prototype was ready the day before the show.

One of the organizers did me a favor and let me into the show. Once in, we applied to compete in the JMPA Innovation Awards. And we won! Bitybean was named one of the top 10 innovative products in the whole industry. That was huge break for us as it came just as we launched the business.